About Us > Presidents > Carole Hayden 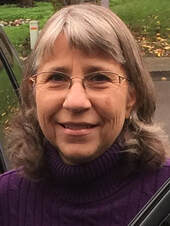 Carole is a native Oregonian, having lived in the state nearly her whole life.  After graduating from Franklin High School in Portland, she attended Brigham Young University.

From the time she was a teenager she has been researching her family history.  The Volga German family of her mother was especially interesting to her as she heard the stories her mother told that had been told to her by her immigrant grandparents.  One set of grandparents came from the village of Frank and the other set from Norka.  It was a thrill in the summer of 2016 for Carole to visit those ancestral villages in Russia.

After having had limited involvement with the Oregon Chapter AHSGR she became more involved after her retirement from the Tigard-Tualatin School District in 2010 where she had been an elementary school library assistant for many years.

President from 2020 through 2023, Carole was serving during the closing of Concordia University and the loss the The Center for Volga German Studies, as well as through the dark days of the Covid Pandemic.  Happily, the chapter has survived all of that.